FOSHAN, China, July 23, 2019 /PRNewswire/ — The 2019 edition of the Fortune Global 500 list was formally released on the evening of July 22, with Wal-Mart, Sinopec, and Shell Oil Company owning the top three spots. The Fortune Global 500 companies in the aggregate recorded total operating revenue of US$32.7 trillion, up 8.9 per cent year-on-year, while their profit reached a new high at US$2.15 trillion, up 14.5 per cent. The net profit margin climbed to 6.6 per cent, while the return on net assets advanced to 12.1 per cent.

The Fortune Global 500 is a proven authority in terms of global company rankings based on operating revenue. The rankings indicate the latest development trends among the world’s largest companies.

Chinese companies dominated the list, with 129 of them claiming a place, outnumbering their American counterparts (121 entries). Sinopec, PetroChina and State Grid Corporation of China were the top three Chinese performers, demonstrating that despite a sluggish global economy, China has maintained stable growth, bolstered by the outstanding achievements of China-based firms.

Despite the downturn in the overall Chinese real estate market in the second half of last year and a series of policies put in place to put a brake on the market, Chinese property developers posted outstanding financial results. Five Chinese real estate firms took their places on the list, unchanged year on year, with two companies among the top 200 for the first time. Country Garden (02007.HK) posted revenue of US$57.3087 billion, representing a year-on-year rise of 70.7 per cent. The firm moved up to 177th place in 2019, up 176 positions since last year as well as the biggest upward move for any single company on the list. This year marked Country Garden’s inclusion in the list for the third consecutive year since its first appearance on the list in 2017, a testament to fast improvements in its strength and size.

Country Garden maintained strong growth in both revenue and profit for 2018. According to the financial statement for 2018, the company’s contracted sales jumped 31.25 per cent year-on-year to 501.88 billion yuan, while revenue advanced 67.1 per cent to 379.08 billion yuan. Net profit clocked in at 48.54 billion yuan, up 68.8 per cent, while profit attributable to shareholders stood at 34.62 billion yuan, up 32.8 per cent. 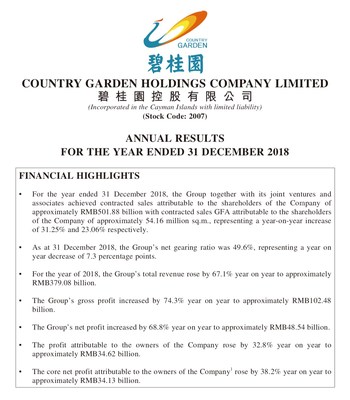 The leading Chinese property developer recorded sales of 281.95 billion yuan for the first half of 2019, maintaining strong growth momentum. In early 2019, with real estate, modern agriculture and robotics identified as three core businesses, the company announced new plans to become a high-tech comprehensive provider of lifestyle solutions for a better world catering to changing market demands and development trends.

Country Garden has become one of the constituents of FTSE China 50 Index, Hang Seng China 25 Index and MSCI Global Standard Indices. The firm has also been included in Hang Seng Composite Index, Hang Seng Mainland 100 and Hang Seng China Enterprises Index, demonstrating that the firm’s growth in corporate size, strong profitability and promising growth potential have been recognized by institutional investors. Country Garden is rated ‘BBB-‘ by Fitch, ‘BB+’ by S&P and ‘Ba1’ by Moody’s (stable outlook), all of which is strong evidence that the three international authoritative credit rating agencies have confidence in the company’s future.