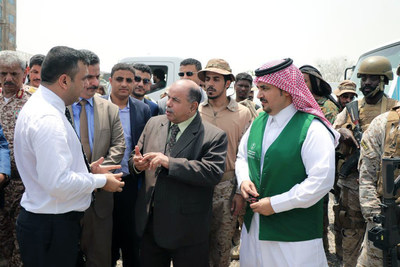 The 5,000-liter Mitsubishi tanker-trucks will alleviate current shortages of clean drinking water in in several districts and augment the benefits of tankers already delivered to other governorates.

Dr. Al Khanbashi thanked the government and the people of the Kingdom for assisting the Yemeni people, “this support will be a milestone in the bilateral relations between the two countries’ leadership.”

SDRPY representative, Eng. Salman Al-Hazimi, said on behalf of program supervisor, Ambassador Mohammed bin Saeed Al Jaber, “The program works to study and implement all the needs of the brotherly Yemeni people, in the water sector and all service sectors, for development and reconstruction throughout the Republic of Yemen.”

He added that the delivery of 40 water tankers today is a continuation of developmental and infrastructure projects previously launched in all governorates across several sectors. Coordination continues with the legitimate government and local authorities to benefit the Yemeni people, providing employment opportunities while improving services and living conditions. SDRPY is also supporting Yemen’s water sector by drilling wells and supplying water tanks in the governorates of Marib, Al Mahra, Socotra and Hajjah, establishing water carrier lines and developing distribution networks in the city of Al Ghaydah and building a purification station on the island of Al Fasht.